What is head-of-line (HOL) blocking?

Head-of-line blocking or HOL blocking is a generic term in computer science that refers to a performance-limiting phenomenon that occurs when a line of packets is held up by the first packet. It can occur in network devices, transport protocols (for eg, in HTTP pipelining), or distributed systems (for eg, slow consumption of a message from a kafka topic partition).

HTTP is a layer 7 protocol that uses TCP on layer 4. In HTTP/1.0, by default, only one HTTP request could be sent over a single TCP connection and its response received unless Connection: keep-alive header is used. Even if a persistent connection is used with HTTP/1.0, requests could only be made serially on a connection. This is not a performant approach when it involves downloading a lot of resources per page from the server, while most browsers only support a few concurrent connections per domain as also mentioned in the RFC. These limitations made web developers resort to techniques like domain sharding and css sprites. 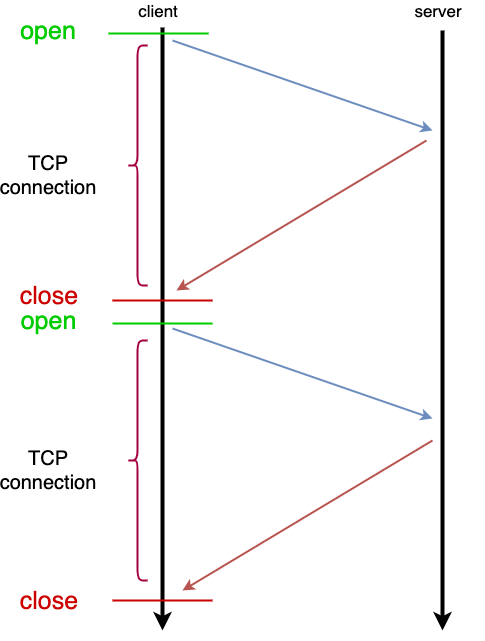 One request per connection

This changed with HTTP/1.1 which made persistent connections a default behavior without the need to specify the Connection: keep-alive header. 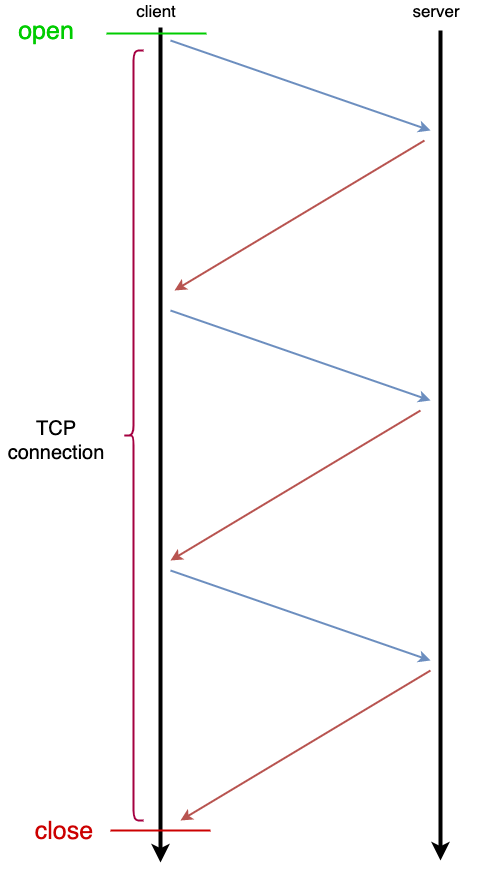 HTTP/1.1 also introduced pipelining, which allows multiple HTTP requests to be sent over a single TCP connection without waiting for the corresponding responses. 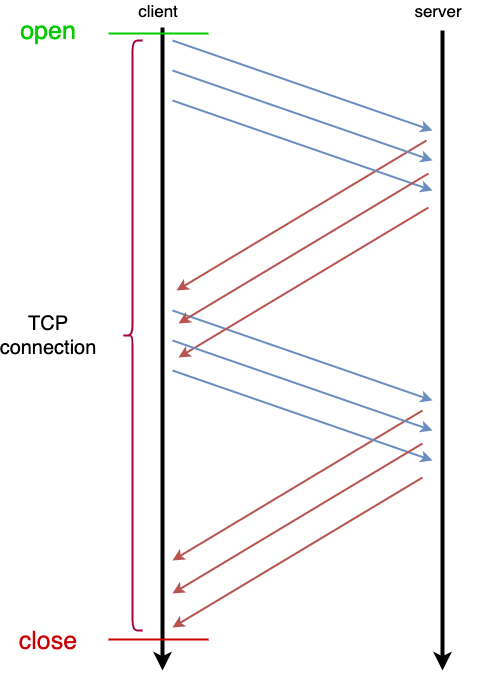 Pipelining improves the performance of loading times of web pages, but it suffers from HOL blocking issue.

HOL blocking can happen with pipelining at different places:

What this means is that the client and the server would always require to process requests and responses sequentially with pipelining. 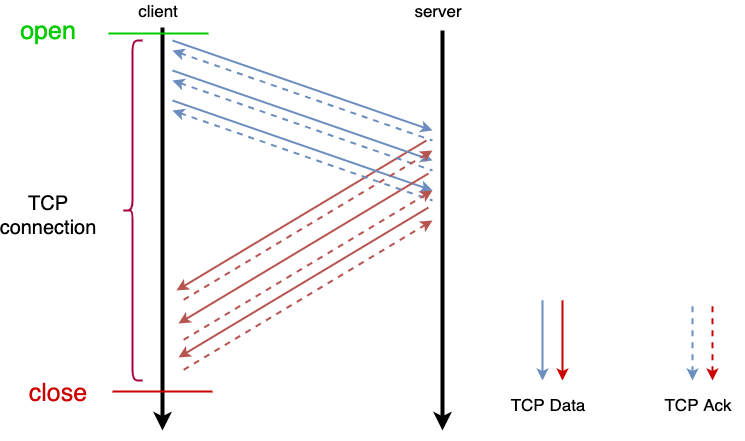 This ordering of requests and responses is required otherwise there is no way for the client and the server to figure out the corresponding requests and responses. HOL blocking can happen here if, let say, the processing of one of the requests or responses takes longer than others or is delayed due to retransmission. It would make other requests/responses wait for the previous ones to be complete. This also makes the implementation of pipelining buggy and error-prone, especially with proxies in between, due to which pipelining is disabled by default in almost all browsers. 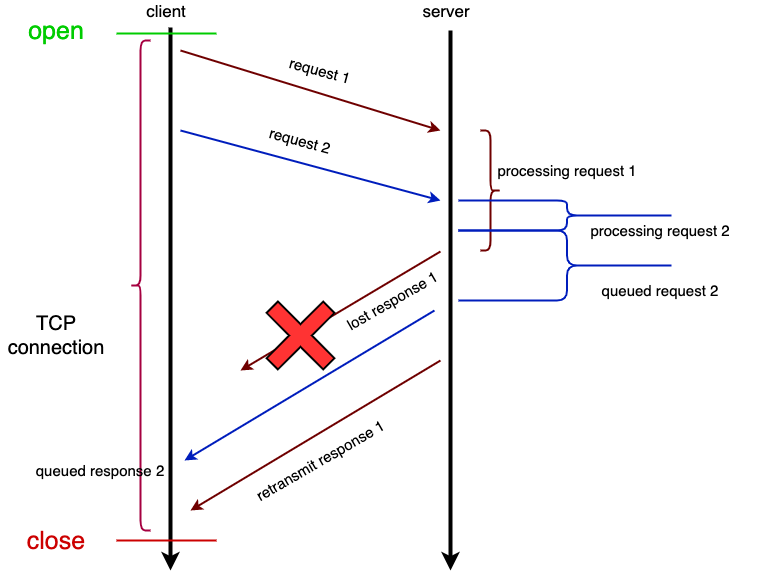 HTTP/2 introduced multiplexing with streams which did solve this issue to some extent, but not completely.

HTTP/2 does not modify the application semantics of HTTP in any way. All the core concepts, such as HTTP methods, status codes, URIs, and header fields, remain in place. Instead, HTTP/2 modifies how the data is formatted (framed) and transported between the client and server, both of whom manage the entire process, and hides all the complexity from our applications within the new framing layer. HTTP/2 allows the interleaving of request and response messages on the same connection through multiplexing which was a limitation with pipelining earlier. Multiplexing allowed a bi-directional flow of request and response segments between client and server without any need for explicit ordering between them. This was enabled by introducing the concept of streams. A stream is a logical single request/response communication denoted by a common stream id. 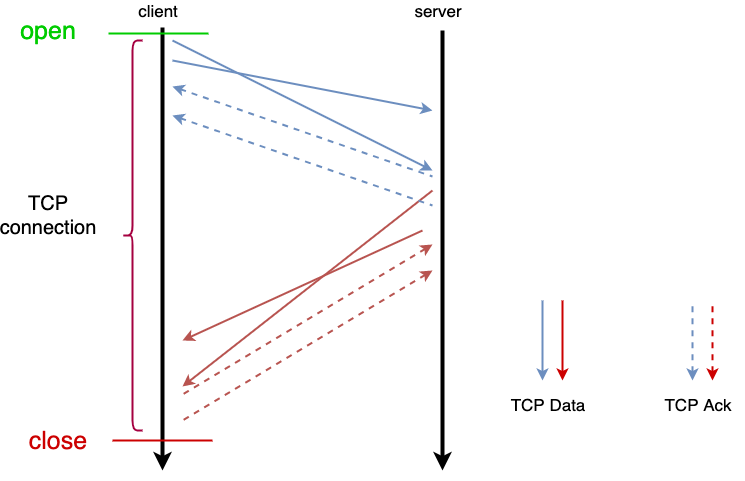 Frames, messages, and streams in HTTP/2

Before diving into HOL blocking in HTTP/2, it’s important to understand its building blocks and how they function.

Frame: A frame is the smallest unit of communication in HTTP/2. A frame carries a specific type of data, such as HTTP headers or payloads. All frames begin with a fixed 9 octet header. The header field contains, amongst other things, a stream identifier field. A variable-length payload follows the header.

Message: A message is a complete HTTP request or response message. A message is made up of one or more frames.

Stream: A stream is a bidirectional flow of frames between the client and the server. Some important features of streams are:

With this, since each frame has a stream id associated with it, it removes the requirement to process HTTP requests and responses in order by the clients and servers. The HOL blocking issue is thus resolved at the HTTP layer, but it now moves to the TCP layer.

To understand why that is the case, recall that every TCP packet carries a unique sequence number when put on the wire, and the data must be passed to the receiver in order. If one of the packets is lost en route to the receiver, then all subsequent packets must be held in the receiver’s TCP buffer until the lost packet is retransmitted and arrives at the receiver. Because this work is done within the TCP layer, HTTP layer has no visibility into the TCP retransmissions or the queued packet buffers and must wait for the full sequence before it can access the data. Instead, it simply sees a delivery delay when it tries to read the data from the socket. It is quite possible that the already received packets can form complete request/response message for a different stream and can be delivered to the HTTP layer without waiting for the delayed packet. This effect is known as TCP head-of-line (HOL) blocking. 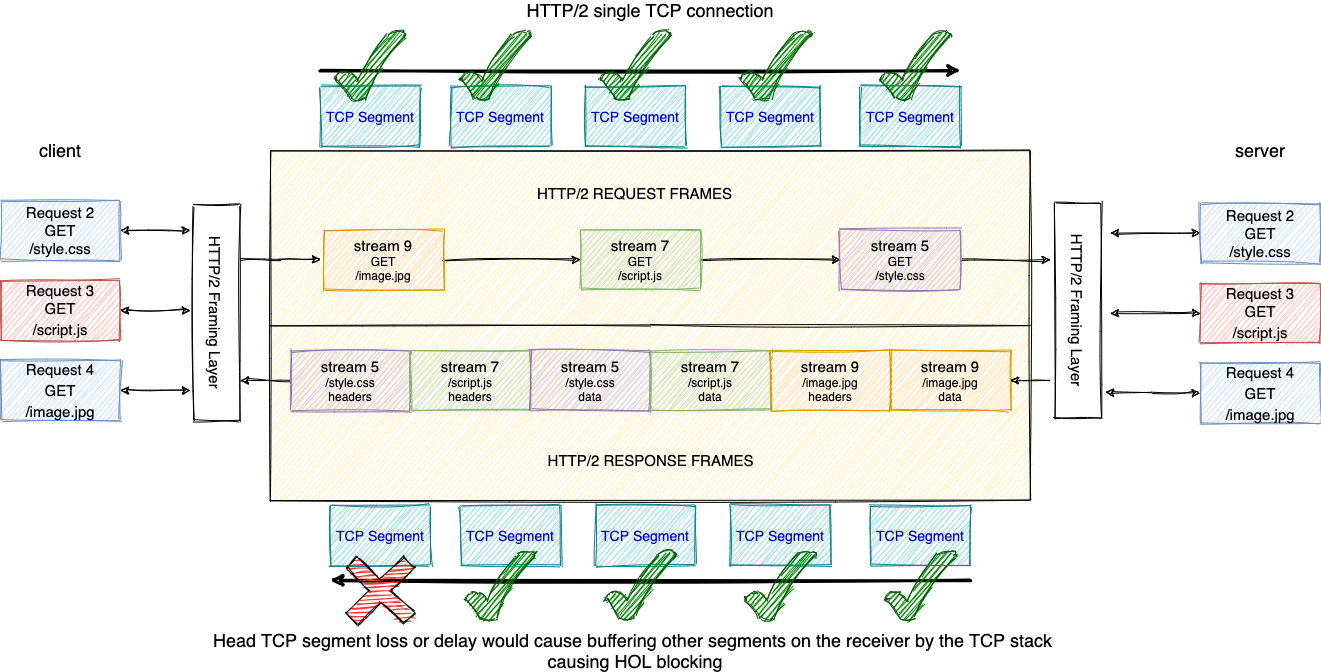 HTTP/3 or QUIC solves this issue by leveraging UDP instead of TCP as the transport protocol. But that’s a topic for some other day. Stay tuned!