Canaries were once regularly used in coal mining as an early warning system. Toxic gases such as carbon monoxide, methane or carbon dioxide in the mine would kill the bird before affecting the miners. Signs of distress from the bird indicated to the miners that conditions were unsafe.

A very well understood and practised aspect in SDLC is deployment of your code or deployment of your service. The world of microservices mostly follow rolling deployments, where the new version of the code is gradually rolled out to all instances of the service without requiring a downtime.

The basic steps of a canary deployment are:

The test phase of the canary deployment can work in many ways. You could run some automated tests, perform manual testing yourself, or even leave the server live and wait to see if problems are encountered by end users. In fact, all three of these approaches might be used. 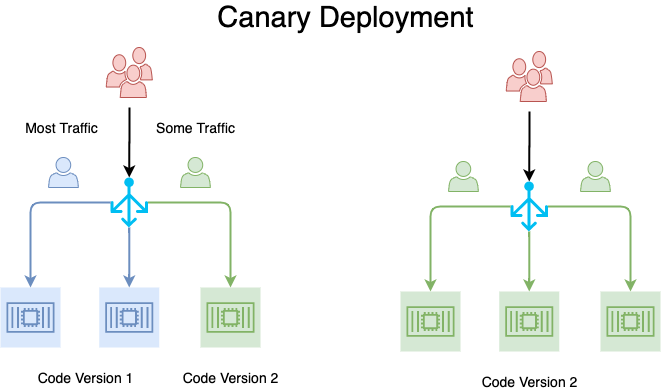 The monitoring of a canary deployment can also be automated by comparing deviations in key metrics of the canary server with that of a baseline server.

At Razorpay, we use Spinnaker for deployments and kayenta for canary analysis.

The canary deployment model with nodes or pods serving web or HTTP/gRPC traffic is quite straight forward and it includes the following. 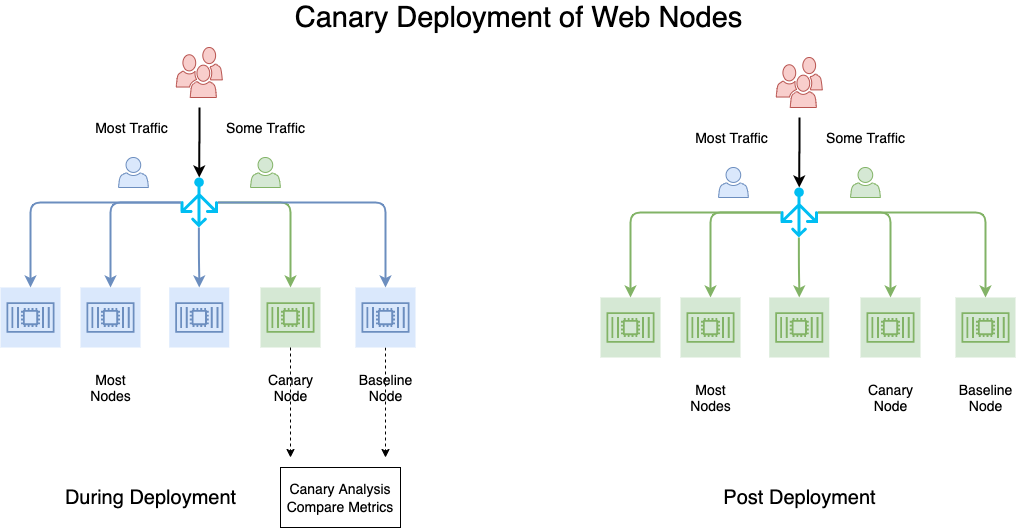 The canary deployment flow is illustrated in the diagram below which is self explanatory in itself. 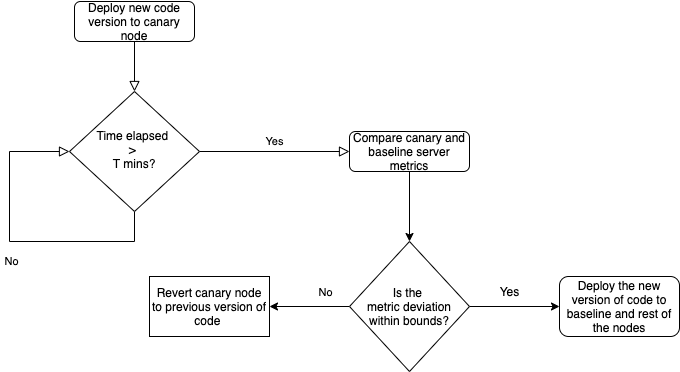 PS: Database schema migrations cannot be canary tested as they are atomic and any changes to the schema apply to all types of nodes alike, canary or non-canary.

How should a standard deployment involving web and worker nodes happen?

Should the web nodes be deployed first or the worker nodes?

With web nodes getting deployed first, there is a possibility that messages produced by new version of code might be consumed by the old version of code running on the workers. This imposes an additional constraint that the code should always be forward compatible. This, in my opinion, is hard to achieve.

On the other hand, deploying all the worker nodes first before deploying the web nodes makes this easier. This is beacuse, in this case, the worker code has to be only backward compatible, which is easier to achieve than forward compatibility.

Lets now talk about canary deployment for queue workers and one of the approaches available is the use of a dedicated canary queue. In this approach, the deployment happens as follows: 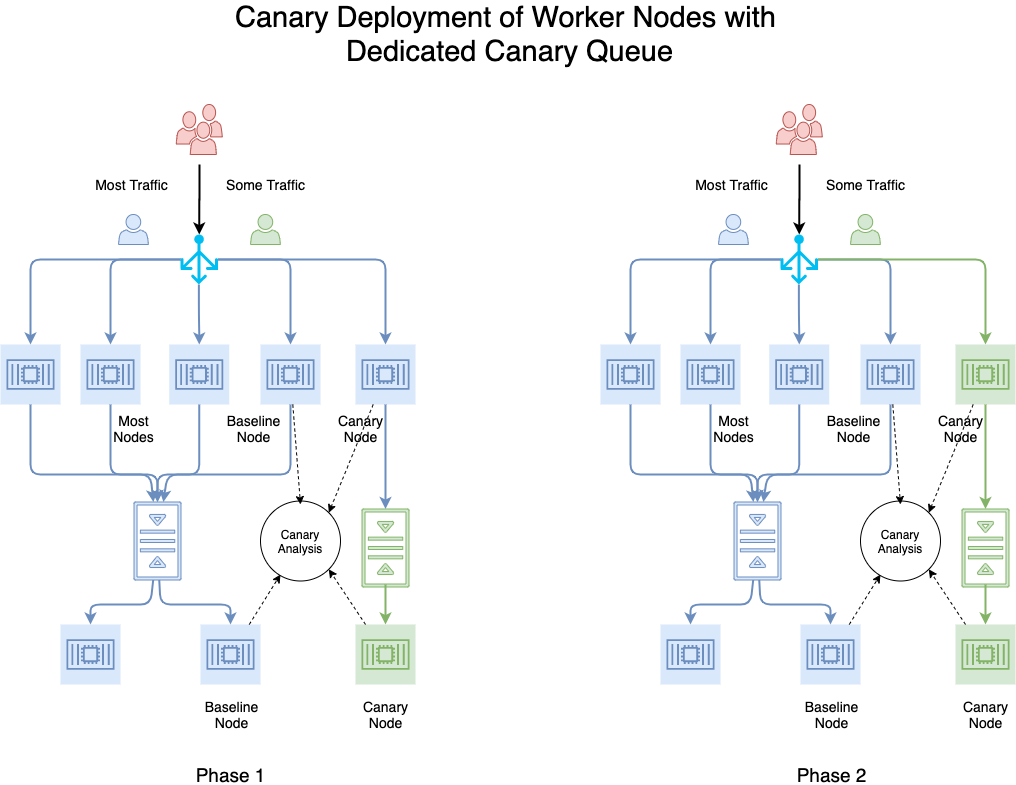 Canary Deployment with a Common or Shared Queue

Another approach to canary deployment of worker nodes is to route all messages through a common queue. In this approach, the deployment happens as follows: 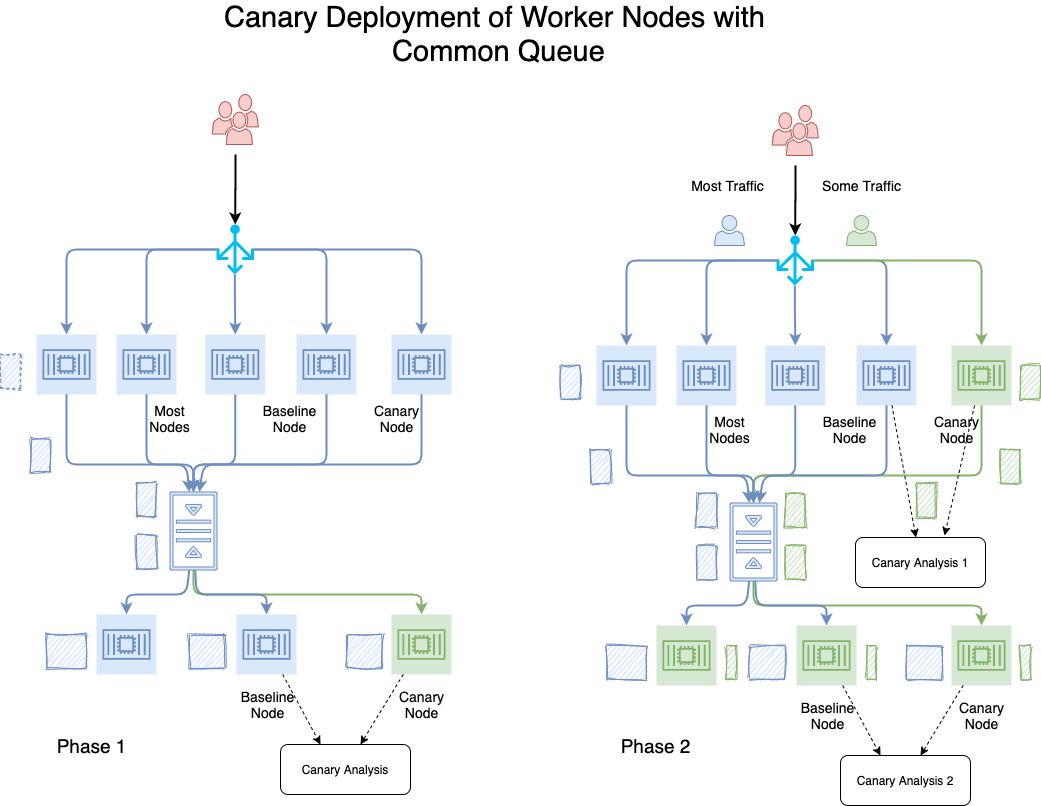